The recording is a solid electro-pop track with a gently caressing synth pad that gives way to a lively arpeggio. It may remind of contemporary dance acts like Hot Chip.

The Song:
“Five Little Things” is a song that has a fun imaginative electronic pop-dance production. The adult, meditation and self help themed lyrics talk about ways to focus the brain on a positive wavelength when you wake up in the morning. The track can appeal to a large audience thanks to the combination of the fun electronic production and the mature lyrics.

There is a short two and a half minutes promotional VIDEO on YouTube featuring Czech Republic model Renata Kumbarova. She definitely gets noticed and remembered by the audience. For the full song listen in Bandcamp or Soundcloud.

Soundcloud embed code is avialable at this link.

The song can be heard, bought and streamed  from Bandcamp:
http://dariomargeli.bandcamp.com/track/five-little-things

Dario Margeli lives in central London. His first song, released March 2011, featured Florida based studio session blues guitarist Hugh Williams. Later that year his song “Somebody Pull Me Up” with remix help by Hungarian producer Gabor Holik circulated through several music sites including the website of the clothing brand Sisley. Another one of his songs, released in 2012, “Exploited Degraded Office Workers” caught the imagination of many because of its daring fun lyrics that talk about the life of today’s middle class workers. All these songs have music videos too. A fan base of 1400 people follow his music on Facebook. His YouTube channel is popular too with over 80000 views. Dario is a US Citizen of foreign parents and spent many years in California. In 2003 due to the dot com crisis he chose to move to Europe.

The lyrics of the sample are in this image:

Link to this press release:
http://www.facebook.com/notes/dario-margeli/press-release-five-little-things-by-dario-margeli/781877458553583

—
There is also a ROCK version of the song.
Here are the details for the rock version.

– Link to the full song on SOUNDCLOUD:

Embed code is available at this link:
http://www.dariointernet.com/flth_rock_embed.txt

– There is a music VIDEO for the song on YouTube featuring actress Renata Kumbarova: 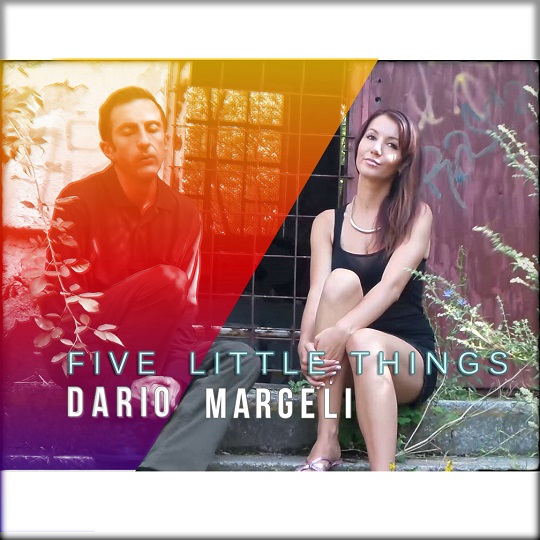 ABOUT THE SONG:
“Five Little Things” is a song that has a meditation and self help theme. The lyrics talk about ways to focus the brain on a positive wavelength when you wake up in the morning. The track can appeal to a large audience thanks to the combination of the fun edgy rock production and the mature lyrics. The bouncy electric guitars have been played and arranged by Simone Sproccati.